I discovered this article in Texas Monthly, a magazine full of wannabe cowboys and #muricaaa. Apparently D.R. was in 1979 so hurt in the butt by the Japanese success that he wrote an article that can only be described as being written by a six year old that whines at mommy because some other kid got the good candy. Enjoy!

You are what you ride
Why you don't meet the nicest people on a Harley.

To the deep disgust of every outlaw biker, Japanese motorcycles have taken over the American market.
Their advertising is everywhere, always insinuating that if you own a Kawasaki, a Suzuki, or a Honda, you will be popular and meet interesting people who, no doubt, are vegetarians and joggers. The slogan “You meet the nicest people on a Honda” may have sold lots of bikes to respectable suburbanites, but it also explains why most outlaw bikers would never ride a Honda. Horses made the Comanches the masters of the plains, and Harleys give their riders superiority over all living creatures. Right-thinking Americans, especially Bandidos, know this is true.
Lone Star drinkers, Adidas wearers, and Fleetwood Mac fans sport their loyalties and good taste on T-shirts, but no cult compares with Harley- Davidson’s. Without any authorization from the motorcycle maker, devotees and profiteers have spawned a thriving commerce in rings and earrings, caps and gloves, ashtrays and beer steins, patches and hashish pipes, even panties and bras, all emblazoned with the winged Harley trademark.
As a tattoo, the Harley emblem is more in demand than the Navy anchor or the Marine Corps bulldog—or even “Mother.”
The machine behind the Harley mystique is a 650-pound roaring motorcycle with a two-cylinder engine. Like that other air-cooled classic, the 1200cc Volkswagen engine, the Harley motor can be endlessly rebuilt. Thousands of forty-year-old Harleys are still on the road, but there is no such thing as a vintage Honda (the first one wasn’t built until 1948), and there never will be.
Honda has produced so many models that none of its dealers can afford to keep all parts in stock. Harley produces only three motors. Some parts for it can be found at auto supply houses, and nearly all are on the shelves of dealerships. Bikers hoard and trade old Harley parts; junkyards take in old Hondas, which are built to sell, not to last. Harley handlebar tubing is bigger, so the bars won’t break. Airplane bolts with reinforced heads are used on Harleys, but not on Hondas; many who have worked How to tell Honda riders from Harley riders—by the tattoos.
on the rice-burners have had stove-bolt heads break off in a wrench. There are plastic body parts on Hondas, but not on Harleys. The gearshift, clutch, and brake levers on Hondas are likely to bend or crunch off in a spill, but Harleyites ride away from accidents. A Harley is a machine your grandchildren can inherit when you’ve ridden it to your grave. About the only thing a Honda is good for is riding to work, because Hondas don’t break down—for three years, after which they rapidly turn to trash. But real bikers don’t work, or ride disposable motorcycles, either.
Honda now makes a machine with a 1047cc displacement that some misguided people claim rivals Harley’s performance. Of course, if you want a four- or six-cylinder engine that sounds like a sewing machine, has a radiator, a fuel gauge, and little lights to tell you what gear you’re running in, then, yes, you do want a Honda. Nobody who rides a Honda smokes real cigarettes, but if you want a Honda and you do smoke, you’d better get a purse to carry your low-tar brand in, for a very simple reason: Harley T-shirts, made only in black, all come with cigarette pockets. But Honda T-shirts come in white and rainbow colors, and you’ll have a hard time finding one with a pocket. And that explains the difference between Honda and Harley—Honda has no class.    D.R. 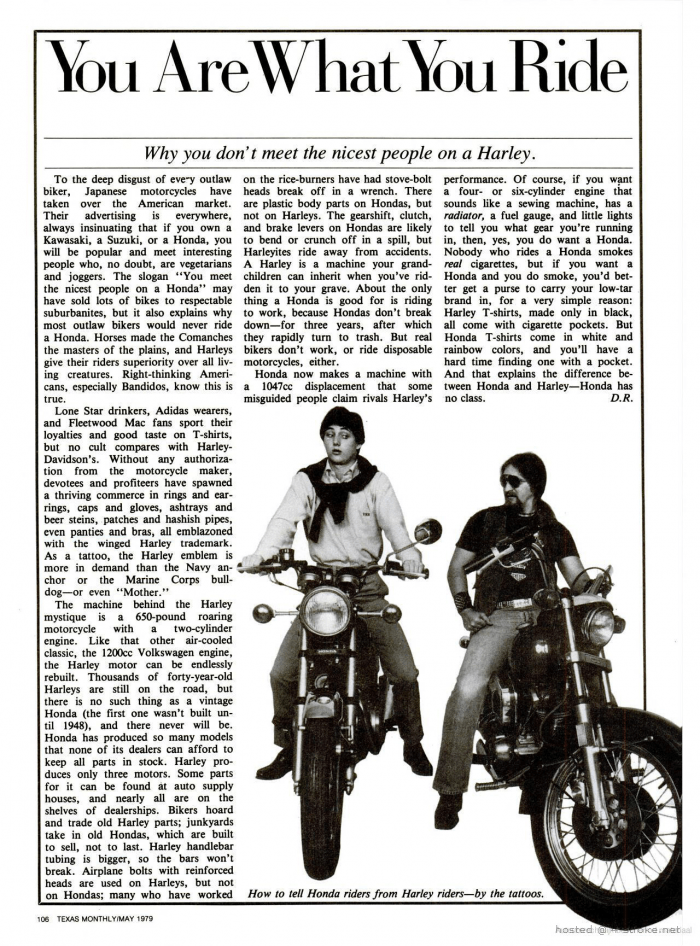