Return of the legend

In 1958, a ten year-old Japanese company introduced a 50cc motorbike dubbed the Super Cub. It was relatively cheap -- equivalent to around $3000 today -- and dependable. In a nation still slowly rebuilding its war-shattered economy, it gave millions of Japanese workers an affordable way to commute and shop. Now, fifty years later, it remains the most popular motor vehicle ever built. Some 60 million have been sold worldwide and it is still manufactured in 14 countries, now mainly in Asia.

The secret of its success was the revolutionary 4-stroke, 49cc engine that Honda developed to compete with the then-dominant and dirty 2-stroke motors powering the small motorbikes of the time. It was the 49cc Honda 50 (renamed in all likelihood so as not to be confused with the Piper-built airplane of the same name) that was featured in the highly successful "You Meet the Nicest People On a Honda" ad campaign in North America. This was the machine that made Honda a household name across the United States in the early 1960s, setting the stage for the later introduction of Honda's highly fuel efficient -- for their time and still today -- automobiles.

Now Honda may be posed to repeat that formula, this time with an all-electric version of the Cub, which will be featured at the 2009 Tokyo auto show later this month. Dubbed the EV Cub (pictured below), it is nearly the mirror image of the original Super Cub (pictured above). While details are sketchy as to possible production plans, performance and pricing, it isn't a stretch to believe that this will be the first battery-powered motor vehicle Honda will produce for commercial sales in the not-to-distant future. If it does announce in Tokyo that it plans to introduce the bike in the next couple years, it will give Honda the test bed it needs to gain valuable experience with advanced battery technology; it is unlikely they will rely on lead-acid to power the bike. NiMH would be a good first guess, but they may opt for lithium-ion, or even have some surprise chemistry up their sleeve like nickel zinc, but that's just speculation.

After building some 300 EV Plus electric cars for the California market in response to the state's 1990 ZEV mandate and subsequent "Memorandum of Understanding", Honda abandoned battery-powered EVs for hydrogen fuel cells. In the subsequent years, it has steady progress, culminating in the remarkable FCX Clarity sedan.

While Honda remains committed to the continued development of fuel cell-powered electric vehicles, it recently announced that it too would be offering an electric car, a concept version of which will also be on display in Tokyo this month. But, it could be the EV Cub that Honda sees as the pathway towards not only perfecting its electric vehicle technology, but also preparing the public for EVs in general. Just as the Honda 50 proved to skeptical American buyers that the Japanese could produce high-quality motor vehicles, even it they were just the small motorbikes their teenagers rode to school on each morning, so the an electric version of the Cub, sold in their millions, will get families, friends and neighbors comfortable with the idea of electric cars, especially Honda electric cars.

Where the Vectrix -- and I'll have more to say about it later -- failed because it was over-priced and totally wrong for the market, an electric Honda 50 priced under $5000 could again transform public opinion and be the fuse that ignites the electric vehicle market. 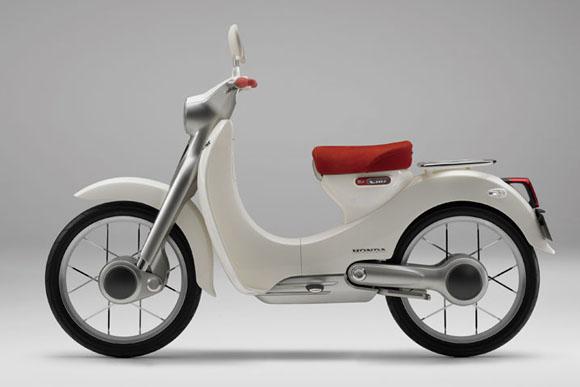 From EV WORLDS, by Bill Moore and published on October 18th, 2009