About those crashes and injuries involving ATC's

After watching the video about the ATC125M in the previous post, I decided to dive into the big library of Hathi Trust to dig up the document named "Consumer Product Safety Commission's response to hazards of all-terrain vehicles"

The document is OCR-ed, so you can easliy search for "Honda ATC" and read about some gruesome accounts of what people experienced with these ATV's. 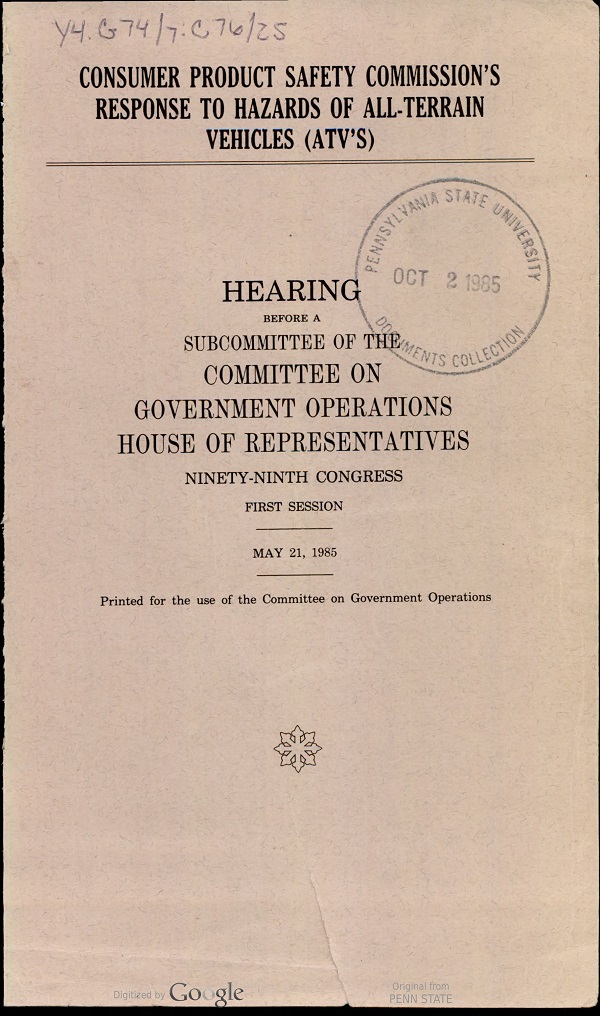 The following us a raw copy of the text, so there might
be errors and extra spaces in words. This is just one story of many.

BY JEFF VANCE Mrs . VANCE . My name is Janet Vance , and this is my husband Jeff . We are from Gatlinburg , TN .

Mrs . VANCE . Our ATC experience started in the fall of 1982 . Our two sons , Matt and Bob , started noticing ads and began begging constantly for three - wheelers . They had wanted motorbikes since they were small , but the rule at our house was no motorcycles or trail bikes . For 2 months they showed us pictures and called us into the den every time an ad came on TV . We repeatedly said that we would not consider buying one .

Then my husband Jeff and I started talking about ATC ' s in private . We knew that if we bought our boys one we would have to get our nephew Mike one , too , because they were all three very close .

Jeff went to a couple of dealers and brought home brochures , which we read and kept hidden .

We went together to the Honda dealer a few weeks before Christ mas . We explained that we were interested in three ATC 70 ' s for our

Mrs . VANCE . We went together to the Honda dealer a few weeks before Christmas . We explained that we were interested in three ATC 70 ' s for our two sons and our nephew . We were asked their ages ; and when we said that two of them were 13 and one was 12 , we were told that the ATC 70 was too small , as it was designed for younger children . We said we wanted something small for them to ride around our farm and enjoy being outdoors .

We explained that our farm was in Gatlinburg and had some steep hills . We asked about the dangers of turning the ATC over backwards or tipping it over sideways in a turn , whether they were common in our area or mainly for use in flat land , how fast the ATC was , and had there been any injuries .

Jeff and I purchased three of the ATC 110 ' s deciding that it seemed the ideal way to satisfy the boys while at the same time to satisfy our desire for safety . We bought Honda helmets , also . It all sounded so good , especially since we have several miles of private dirt and lightly graveled roads on our farm .

By 5 : 30 Christmas morning , the boys were reading the Honda owner manuals that Jeff said must be read before they could ride . When the boys finished , Jeff went over it with them , asking ques tions and explaining everything . Then they went over the ATC ' s , learning the parts and how to operate them . I told the boys that they would always have to dress properly and wear helmets .

Finally , the boys got to ride . The rules were : No gear higher than second , and stay on the roads . An hour later they came in , and Matt , our 12 - year - old son , had dirt all over his side . He had turned sharp to come up the drive and the ATC tipped over into the bank . Jeff talked to them about being careful and let the

let them continue to ride . We didn ' t think they could get hurt even tipping over as slow as they were going .

Many family members had gathered at our house that Christmas Day to celebrate the holidays together . That afternoon , Bob - our 13 - year - old - Matt , and their Uncle Greg started out to ride . It was unseasonably warm , and Bob said : “ I ' m not going to wear my helmet , it ' s too hot . ” I said : “ No helmet , no ride , no discussion . " He laughed and , putting his helmet back on , went out to ride .

Later in the afternoon , I walked into the dining room and saw my husband Jeff had left the house and was driving off in the car . I went to the window and saw all of the cousins and my daughter Myra huddled around my son Matt . They looked wrong somehow .

Greg told us that he and the three boys had been riding on one of the roads on the farm . None of them were going very fast . Greg was behind Bob and saw him lose control on a curve . The ATC bounced across the road and flipped down the hill . It threw Bob into a tree with enough force to throw his helmet 20 feet away and then the ATC landed on his back . Greg said that at first Bob was still , then his arms and legs started jerking as he ran down to get Bob and carry him to the road .

At the hospital , we learned that Bob had several broken bones , a concussion , damage to his lung , kidney and pancreas . He had a purple line across his neck where his helmet strap had been and a clear purple tire track across his back . The first night he kept jerk ing up in the bed with his arms extended , as if holding handle bars , then he would fall back , saying : “ I thought I was on my 3 wheeler . "

The pancreas injury turned into acute traumatic pancreatitis . The doctors said that Bob had to have had a tremendous blow to do the damage that was done . It was very difficult for us to accept that our son had a debilitating disease as a result of an injury .

As the weeks passed , Bob faded before our eyes . Our son , who so recently had been happiest roaming mountains and fishing the streams , was content to lie in bed doing nothing . He didn ' t want to eat , and we often spent an hour coaxing him to eat a bowl of soup .

Jeff and I took turns at the hospital , and every time I drove from Gatlinburg I had to pass the Honda place . I was furious with them and wanted to stop and ask them how they could sell those things to children ; how they could represent themselves so confidently as knowledgeable ? Why didn ' t they warn us at all ? Surely there were adults who would buy ATC ' s anyway , but didn ' t they feel that chil dren are everyone ' s responsibility ?

If we had heard one warning , one indication of the danger we were placing our children in , we never , ever would have bought an ATC .

Bob was extremely sick , and the situation had reached the point where the doctors said that his condition was very critical . They said that they had done everything that they could and it wasn ' t working .

Our guilt was tremendous and irrational . All around us children were suffering , but from illness , from uncontrollable sources ; whereas , every time our son called out in pain we felt that we had done this to him and that we had caused the horror he was living in .

I don ' t have the vocabulary to describe the weight of fear we lived with those days . We stood helpless while our son begged us for help , begged us to let him die . We watched his blood running out of a tube from his stomach and a tube from his lung . Tubes in his chest and arms were replenishing vital fluids he was rapidly losing internally . His eyes were dark and blank , seeming to be in a place we couldn ' t share . A last - minute decision was made to do surgery , although we

carefully warned it probably wouldn ' t help much . After sur gery there were 11 days of pain and morphine in a pediatric inten sive care where Bob was told he had set a record of having 12 tubes in his body . Repeatedly we heard : “ Do you realize how lucky you are ? ” The surgeon said : “ I never dreamed I could do a definitive surgery . ” There was hope again , and they called Bob the “ miracle child . ” We have no guarantees because pancreatitis is a tricky thing , but we are thankful for every day we have our son .

When we got home we immediately called or wrote to every friend we have with a son telling them what had happened and warning them about ATC ' s . Everyone who knew Bob and knew that he had always been an intelligent , cautious child recognized the truth when we said that no child , however skilled , is equipped to handle a machine that is so unstable and yet so powerful and heavy . We saw the doubt in people who didn ' t know Bob well . The natural doubt that if a young boy is hurt on something with a motor that he was surely doing something wrong .

In Gatlinburg , TN , three - wheel cycles don ' t sell very well , and we have had many parents tell us that Bob ' s experience changed their minds about purchasing an ATC .

It is sad that our son was forced to know the fine line between life and death and to know suffering at an age when he wasn ' t mentally or emotionally ready for this knowledge . When he came home and was fussed over and rejoiced over , instead of feeling he had been given a great gift , he felt like a freak , different from his peers . He wasn ' t disobeying or doing something wrong ; yet , some thing horrible happened to him , and he can find no joy in the expe rience . He never talks about the accident and when any tions it he becomes tense and angry .

Now that awareness of the danger of ATC ' s is growing through the statistics , the media and committees such as this one , we have the heartfelt hope that something , such as banning ATC ' s com pletely or at least banning the sale of them for children , will be done .

We are glad to be here to express our deep feelings on the seri ousness of this situation and our strong desire to prevent other children and parents from going through what we and too many others have had to experience . Mr . BARNARD . Thank you very much , Mrs . Vance .