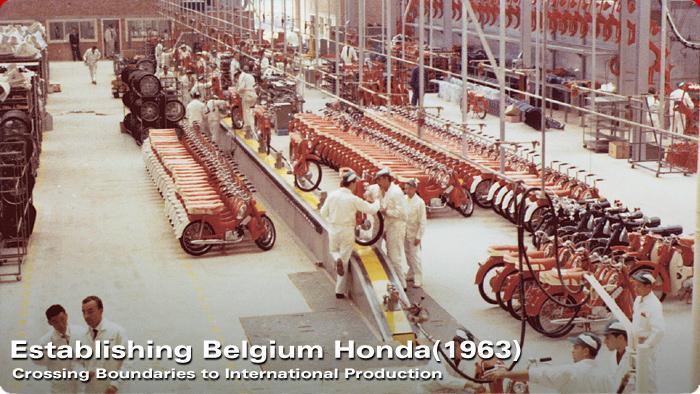 A Decision by the EEC Research Team

The research team thus began to focus on West Germany, the EEC's most stable economic power, as the best candidate for factory operations. The team decided to stop by European Honda in order to get a briefing on the market situation, after which the research would continue in West Germany. Therefore, at the end of January 1962, the trio of researchers headed for Hamburg, with Iwamura leading the way.

The three members of the research team spent more than two weeks traveling through West Germany's major industrial cities, collecting information for analysis. Along with the progress in their work came a certain realization regarding the European market; an assessment that no preliminary research, book, or other resource could have provided.

It was the moped (Note 2*) that had entered the picture. The wide use of these vehicles throughout the region was much more than the team could have anticipated. Of the estimated annual demand of 2 million motorcycles in Europe, about 80 percent was for mopeds. Many European streets even had special bicycle/moped routes bordering the sidewalk. Thus, the moped had long since established itself as a popular means of transportation in the region.

France was the EEC's top producer of mopeds, with annual production exceeding 1 million units. Other major producers of mopeds were Italy, West Germany, and England. Much like the Japanese motorcycle industry surrounding Honda in its earliest days, a number of small midsize manufacturers were producing mopeds in different factory locations.

Moreover, it was soon apparent that West Germany had numerous drawbacks. For example, it was home to several major manufacturers of motorcycles and mopeds, including BMW. Its labor market was nearly fully employed, and the minimum wage had reached a fairly high level. West German prices were also higher than any of the remaining five EEC countries. It would therefore cost considerably more to obtain a decent-size lot for the construction of a factory, buildings, facilities, and the employment of many people. 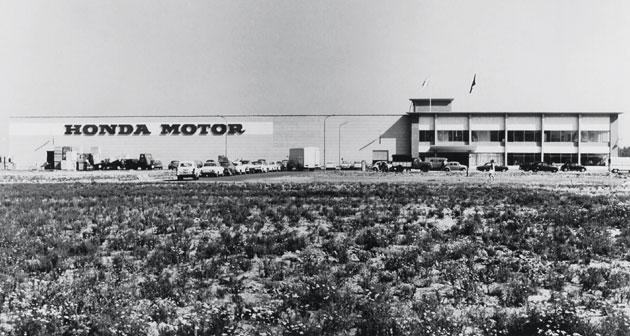 Front view of the factory at Belgium Honda. Today it produces automobile parts.

The research team thus expanded its purview to include all the EEC countries, with the exception of Luxembourg. Soon, as the team compared and examined conditions in each country, Italy and France were scratched from the list for much the same reason as West Germany. In the end, only two countries remained: the Netherlands and Belgium.

Among the EEC countries, the Netherlands and Belgium were somewhat behind in terms of modern industrialization. However, since the launch of the EEC they had been working to promote industrialization by actively soliciting funds, including foreign investments. Therefore, both nations greeted Honda's research team with open arms, enthusiastically inviting Honda to establish a factory in their country. Government officials personally escorted the research team on tours, introducing a variety of possible sites.

After seeing first-hand the conditions in the two countries, the researchers began to favor Belgium as the more appropriate location.

Belgian cities already had many factories. Though small, these factories were known as highly reliable suppliers of parts to the carmakers of West Germany. Moreover, the minimum wage was low compared to West Germany's, and the prospects were good concerning a sufficient pool of skilled labor. Added to that was a major push by the small city of Aalst, which began to woo the research team during their tour.

Aalst was a small town with a population of about 50,000, located within a 40-kilometer radius of both Brussels (the capital) and Antwerp, a free-trade port city. While Aalst and the two cities were connected via expressways, there also was a canal connecting Aalst to Antwerp, upon which goods could be transported. Moreover, the city fulfilled all the conditions for corporate activities, including materials procurement.

Note2*: Moped. Mopeds refer to European bikes that are equipped with pedals. In Japan, they are now called 'mopetto.' While mopeds were by law restricted to engine displacements of 50 cc or less and a maximum speed of 40 kilometers per hour (varying somewhat amoung countries), they also were given tax privileges in taxes, insurance, and special traffic rules. Moreover, the minimum operating age without a license was sixteen years. The moped---actually a kind of motorized bicycle, belongs to an entirely different category than motorcycles such as the Super Cub and scooter.